By Lewis Perdue on January 20, 2022 in Uncategorized

The chart on the left was published October 27, 2020 in MedRxiv: as Investigating hsCRP as a clinical inflammation marker for human Bisphenol A food contamination offers protocol suggestions for conducting replicable, causal dietary intervention studies (doi: https://doi.org/10.1101/2020.10.25.20212282).

By contrast, the chart on the right, from September 2021 mass spec data, revealed scant evidence of BPA and substantial presence of BPA chemical structure analogues BPF and BPS.

These issues confirm the original study’s recommendations including the need for dosing, and dormitory environment to improve dietary intervention study replicability, and determination of causality.

After The Nov. 25, 2015 approval of the study by the University of California San Francisco School of Medicine (UCSF) IRB/Committee on Human Research, the Parnassus campus pathology lab at UCSF Medical Center agreed to analyze blood samples of hsCRP. Following that, a qualified UCSF research lab agreed to perform serum analysis.

The time to conduct the trial was extended on Oct. 27, 2019 because of delays caused by a fundamental re-examination of food sourcing requirements in order to facilitate replicability.

The head of the UCSF research lab provided blood draw “vacutainer kits” which the lab had validated as being free of leaching BPA and other plastic-derived chemicals.

While it would be less expensive to use urinalysis. that method measures the glucuronide metabolized form of BPA, I was hoping to compare ratios of free BPA (serum) with BPA-glucuronide. While measuring free BPA in human serum was difficult in the early 2000-teens, reliable LC/MS methods have been developed to surmount early obstacles

The ratio of free/metabolized BPA levels compared with hsCRP inflammation indicators would have been further instructional given recent research  that indicate that BPA-glucuronide may be more harmful in the human body than free BPA.

Selected citations for this and other sections are included in (Citations, Appendix 2)at the end of this document.

In the run-up to the trial, I exchanged multiple emails with the Silent Spring Institute who had a program — Detox Me Action Kit that accepted urine samples from the public and researchers.

Those discussions dragged on and in early October 2019 — just weeks before the trial was to begin — the SSI responded that they were too busy and would not accept our samples.

The trial began in late October 2019 but had to be interrupted by continuing intermittent power outages from the Kincade Fire which was the largest of that year’s California wildfire season. The trial was restarted in early December.

Accordingly, test subject blood was drawn by the pathology lab of a UCSF affiliate hospital — Sonoma Valley Hospital —and delivered to the UCSF research lab and to the Parnassus campus hospital lab within an hour of draw as specified by the head of the UCSF research for BPA analysis.

In January 2020, investigators inquired about the UCSF research lab’s progress on analyzing the blood samples. The head of the lab then said he would not be processing the samples as previously agreed. The lab agreed to preserve the samples at -80C and hold them for our removal. With significant information from the hsCRP data, but lacking BPA data, investigators decided to begin working on a paper based on the incomplete data which had been captured.

What have we learned?

As noted in the MedRxiv study, even without BPA data, the results approximately replicated a larger, NIH-sponsored published trial. That trial did not measure any specific chemical biomarker compounds suspected of influencing biological processes, but used the NOVA system that provides a broad, generic distinction between processed and ultra-processed foods 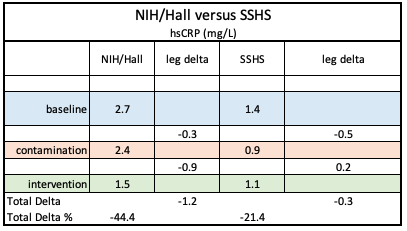 Unfortunately, the lack of serum analysis was a major omission  in the paper, so after the MedRxiv digital publication on October 27, 2020, a search was launched for a new lab to process the serum BPA samples with the goal of editing that publication or creating a follow-up paper..

Elaborate preparations were made to maintain the sample cold chain from UCSF to Corvallis and where they were delivered on May 13, 2021.

Another delay followed because BPA analysis of human blood requires an extreme degree of precision, the Linus Pauling Institute required its mass spec devices to be cleaned by manufacturer representatives followed by re-calibration.

The Director of the Linus Pauling lab analyzed the blood samples using ultrahigh pressure liquid chromatography-tandem mass spectrometry using a triple quadrupole Shimadzu mass spectrometer which allows the study of  the presence of other chemical compounds.

The results, delivered on September 24, 2012 unexpectedly revealed BPA concentrations that were beneath the LOQ (Limit of Quantification).

The lab also analyzed the serum extracts using a high resolution quadrupole time-of-flight mass spectrometer using untargeted scanning for BPA, BPF and BPS which may be studied for the presence of other compounds.

As evidenced by comparing initial results with those from the Linus Pauling Institute (below), the comparison with NIH/Hall are consistent while, the mass spectrometry results contain multiple anomalies.

By contrast, the chart on the right revealed scant evidence of BPA and substantial presence of BPA chemical structure analogues BPF and BPS.

The anomalous Mass Spec concentration ratios among indicate that product manufacturers have substituted analogues for BPA. This may be an effort for manufacturers to make marketing claims that items are “BPA free.” Evidence, however, exists to indicate that the analogues are not less harmful than BPA, and may actually be more harmful. (see citations)

While not a chronological study, this paper: “Determination of trace levels of eleven bisphenol A analogues in human blood serum” confirms the widespread use of BPA and 10 analogues 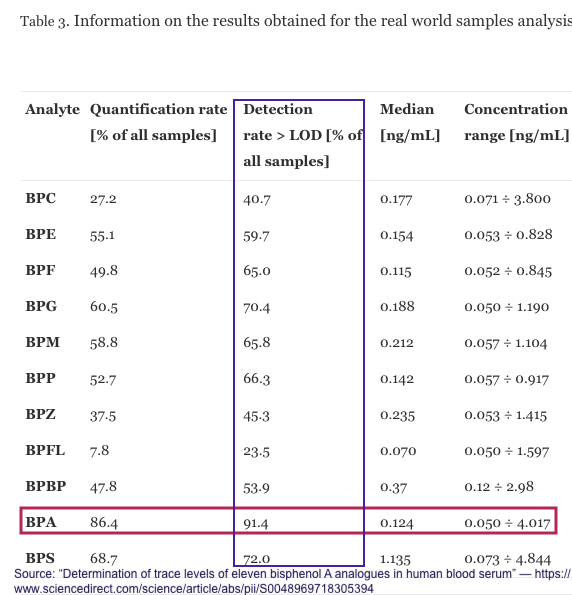 BPA and analogues over time

Published journal reports of BPA levels over time tend to be sporadic, inconsistent, and measured by a variety of methods which makes it difficult to impossible to credibly determine variations.

One credible study — Urinary Concentrations of Bisphenol A and Three Other Bisphenols in Convenience Samples of U.S. Adults during 2000–2014 — indicates the temporal substitution of analogues for BPA 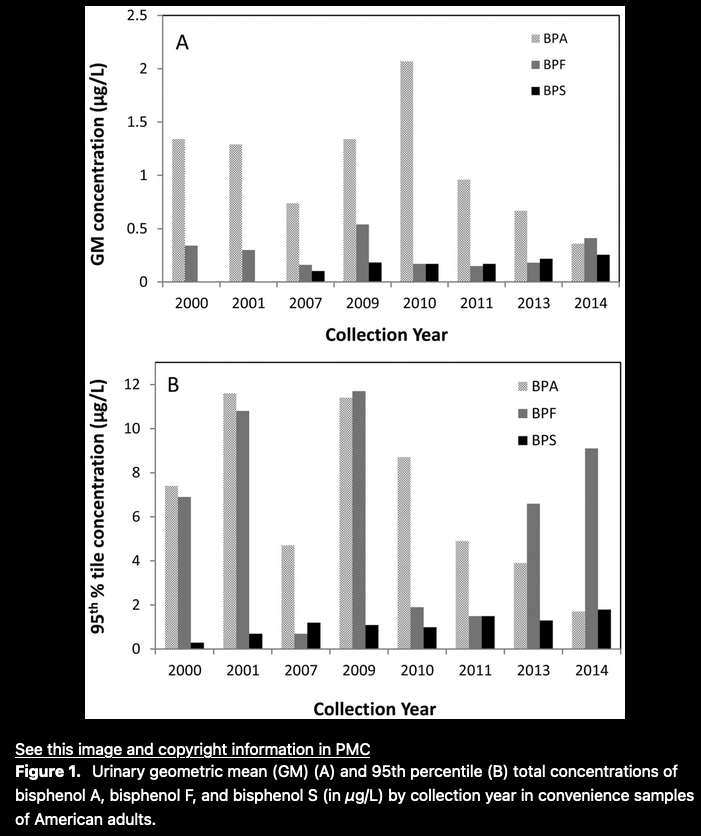 Another credible, but limited assessment from the National Health and Nutrition Examination Survey (NHANES), is excerpted in Appendix 1, and indicates a decreasing detection of BPA levels in humans tested, and a concomitant increase in BPF and BPS.

That parallels the relatively high concentrations in BPF and BPS in our trial serum specimens, but leaves the sources unknown and the results anomalous.

In addition, the measured changes in analogue compounds and main metabolite among the three legs were inconsistent with theorized changes and may reflect the effects of compounds other Plastic-derived chemicals than Bisphenol upon hsCRP inflammation measurement and/or unknown contamination sources in intervention food ingredients, meal preparation or subject environment e.g. PM2.5 levels.

Using an n-of-1 design allowed current investigators to economically complete a novel experiment to search for a standard and easily employed biomarker for direct human evidence of harmful effects of Bisphenol A.

This is significant because regulatory decisions have been based on scientifically flawed government trials (Primarily two CLARITY studies) of a murine model incorrectly concluding that Bisphenol A is not harmful to humans.

Other studies incorrectly claim that BPA metabolites are not harmful, and that it is rapidly metabolized and excreted. Numerous published studies indicate that both claims are untrue.  (Citations, Appendix 2)

What’s more, hundreds of other well-designed NIH and other academic studies which detail a wide variety of endocrine and epigenetic harms are unacceptable regulatory for consideration. (Citations, Appendix 2)

Finally, acceptance by the government and the governed population of harms from a toxic substance regulated bu the results of tests on mice and other non-human organisms ultimately required testing in human populations — just as is conducted for new pharmaceuticals.

The validity of current regulatory science makes it vital to recognize that 90 percent of promising new drugs fail to make it to market even after human trials. (Free article from Science blog here).

For that reason, developing a reliable and relatively inexpensive, and clinically acceptable   biomarker — such as hsCRP–  for BPA and other chemicals,  will broaden the ease of human experimentation and widely acceptable data creation.

The most useful and economically practical first step would be an n-of-1 study using urine sampling and the principles outlined in the MedRxiv study:

Geometric mean and selected percentiles of urine concentrations (in μg/L) for the U.S. population from the National Health and Nutrition Examination Survey.

Bisaphenol F and S not monitored

* Not calculated: proportion of results below limit of detection was too high to provide a valid result. 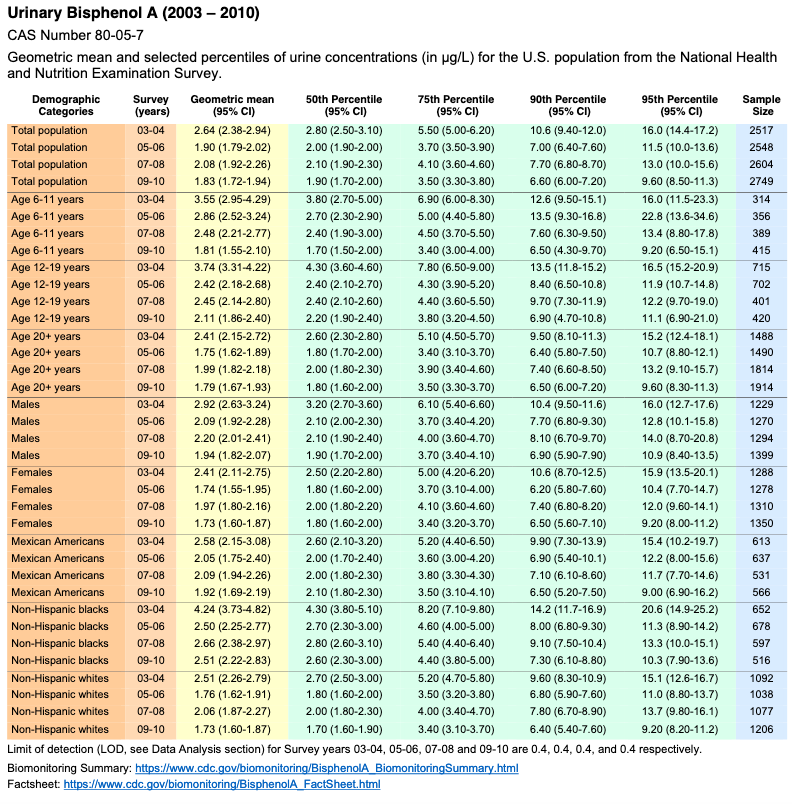 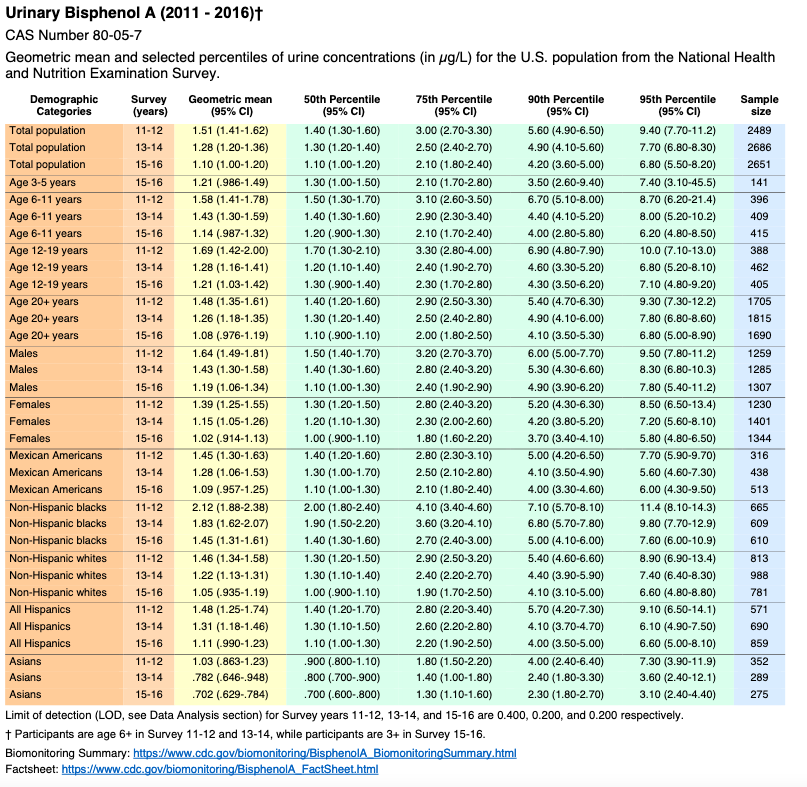 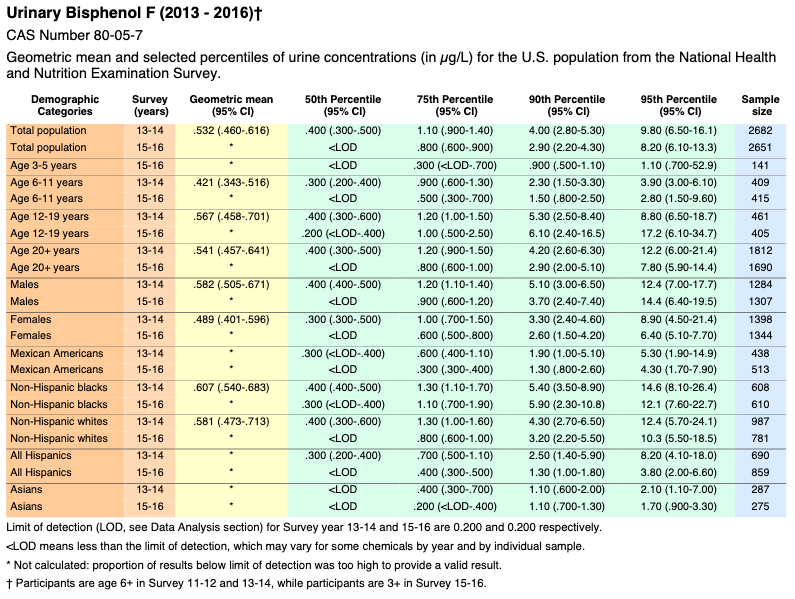