By Lewis Perdue on January 22, 2020 in The Study As Approved

Note: There is an inconsistency in the literature on reporting high sensitivity C-Reactive Protein levels.

The test procedure for measuring quantities below 10 mg/L is hsCRP.

However, published papers most often refer to the protein as hsCRP which is, technically, incorrect because that is the test, not the protein.

Because most papers use hsCRP consistently to refer to the protein, Investigators have followed the inaccurate terminology and done that as well even though it seems like a foolish consistency.

The hsCRP readings at the end of the trial were not what was expected. On the other hand, real science often starts when the results are not as anticipated.

The following is a quick summary of findings and possible considerations and roots of the unexpected results. Citations are available.

Note that the analysis of concentrations of BPA and other chemicals in the panel are not yet available. 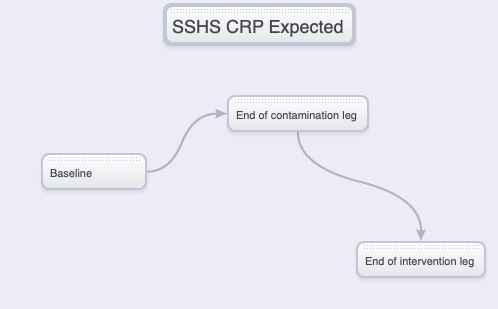 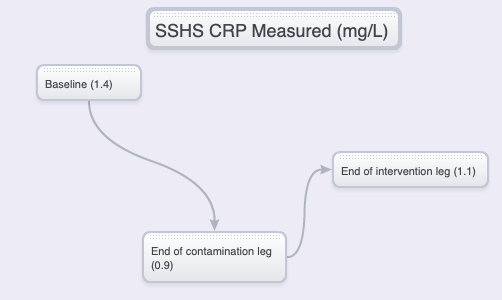 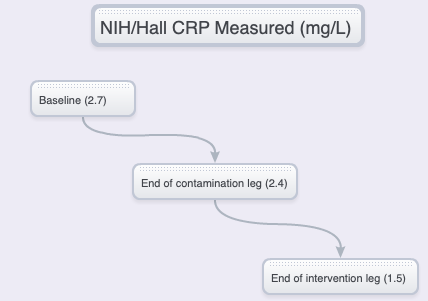 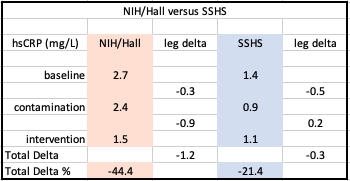 Both studies showed a net decrease in hsCRP at the end of the trial, with the NIH/Hall study showing a decrease almost double that of the SSHS. The NIH/Hall study began with a baseline almost twice that of the SSHS.
In addition, investigators expected that SSHS would show a larger decrease in hsCRP following the intervention.
This is because the SSHS study protocol was stricter than NIH/Hall because it eliminated commercial food processing contamination and, in addition, employed the most extreme measures to reduce BPA and plastic chemical exposure in sourcing and food storage and preparation.
One unknown data point in the comparison is the margin or error on the hsCRP measurements conducted by UCSF labs. The NIH/Hal study cited a +/- 0.3 mg/L margin of error. Assuming UCSF labs have a similar margin of error, that is more relevant given the low concentrations involved. However, doesn’t change the overall relative behavior of the amounts in either study.
The difference might possibly be explained by the length of the studies. Our study ran for a week. The NIH/Hall study ran for four weeks which may have offered more time for hsCRP to reach equilibrium.

The NIH/Hall study was designed to investigate a possible connection between ultra-processed foods and excess intake of calories. As such, it was an ad libitum trial which allowed subjects to eat as much (or little) of the foods in each leg. The 28-day trial included 20 adults (10 male, 10 females) and was conducted at the NIH Metabolic Clinical Research Unit.
The NIH study is noted not only because of the apparent anomaly in the first leg results, but also because it is the only dietary intervention in my literature searches with an extensive blood panel for the subjects and the only one in which hsCRP was measured.
Accordingly, the hsCRP level decrease after the ultra-processed leg in the Hall study — like that in the SSHS — would seem to run counter to expectations. The Hall study is also significant because it measured so-called “appetite” compounds: leptin, ghrelin, and adiponectin as well as insulin.
This is important because:
An expanded discussion of this study as related to ours is in order, given that the investigators of that study made numerous protocol errors that render the study incapable of being replicated. Some of those fundamental errors include:

What’s going on? A look at the baseline versus “unhealthy” trial leg hsCRP anomaly

Unhealthy pre-baseline diet?
The anomalous results in both the NIH/Hall study and the SSHS could indicate that the processed/plastic contaminated legs were actually healthier than baseline.
In my case, the initial efforts to begin the actual study were urgent and rushed in order to try to complete the trial before the CHR expiration date. As a result, my baseline diet relied heavily on pre-prepared supermarket meals and fast food. Thus, my baseline could have been less healthy than the plastic contamination leg of the trial.
The same “unhealthier baseline” diet, may have influenced the NIH/Hall anomaly with hsCRP levels dropping after the end of the ultra-processed leg of the study.
Air pollution confounding factors

The Kincade Fire in northern Sonoma County started on October 23, 2019, was contained on Nov. 6 but continued to burn and affect the test location during and after the SSHS study was finished.

Because PM 2.5 is a potent inflammatory agent, a monitoring device was purchased to track indoor air quality and activated the day before the first (baseline) blood draw.

In retrospect, activities probably should have been restricted before the baseline draw.

However, a literature search has not found a reference dealing with the pharmacokinetics of PM 2.5. It is, at this point, unknown how long a pre-baseline isolation period would need to be for an unconfounded valid baseline.

Accordingly, outdoor activity was limited during the trial because of wildfire smoke pollution.

In addition, a new HVAC filter was installed and two stand-alone HEPA air purifiers employed at the trial location to keep indoor air below 10 ppb even when outdoor air was consistently unhealthy at 70 to 100 ppb and occasionally exceeding 150 ppb.

Because outdoor activities were not restricted before the trial, the baseline hsCRP was probably affected, contributing to an unhealthy baseline measurement. 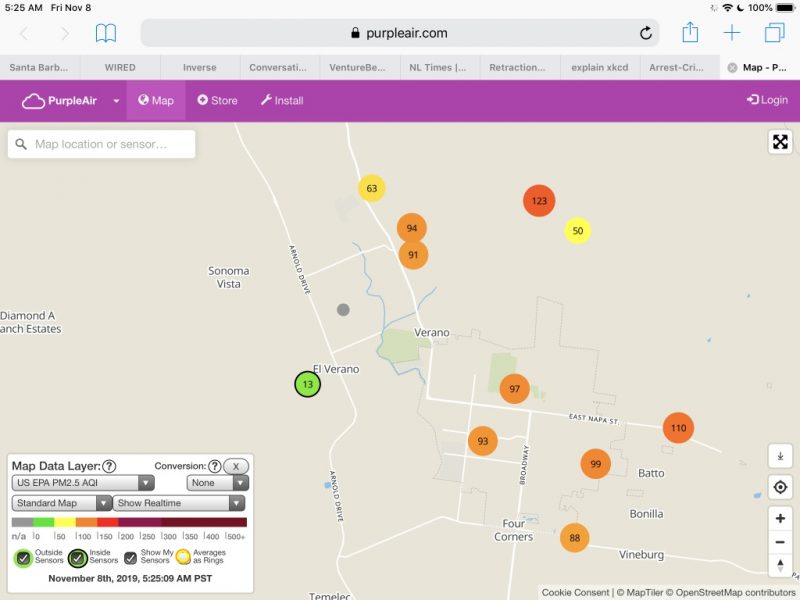 Indoor air quality at the test site was constantly monitored. Multiple HEPA air purifiers assured that indoor quality was maintained at a healthy level which was most often below 5 ppb.

In addition, the air was extremely unhealthy on the North coast on Nov. 8: the date of the first blood draw and the first day of the “Typical” diet. Significant to the PM 2.5 exposure is that the blood sample for BPA and other toxics testing needed to be delivered to the lab at UCSF Mt. Zion within four hours of the draw.

Because the test subject and investigator were the same person, that means that the scientist/lab rat had to be exposed to extremely unhealthy PM 2.5 for at least 3 hours including the commute into San Francisco and the deliveries of blood samples to the lab and the hsCRP sample to the lab at the Parnassus campus. 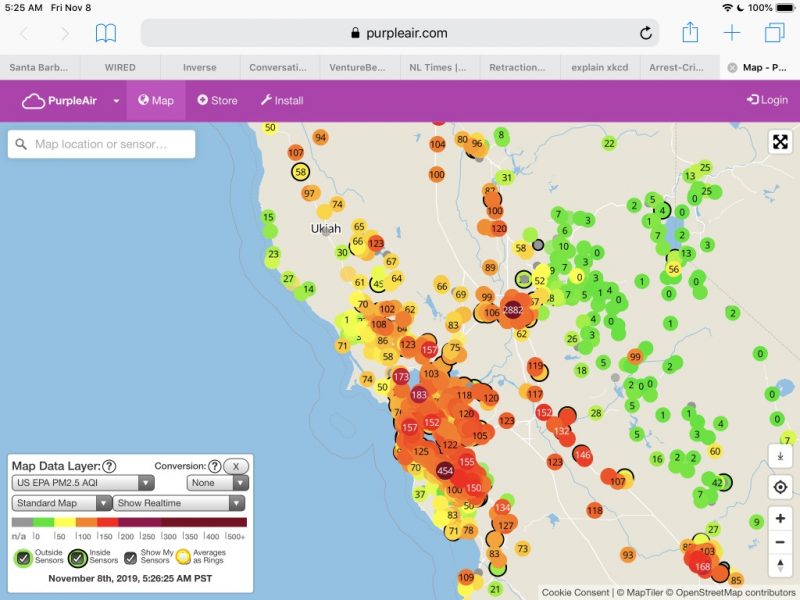 Restriction of outdoor exercise meant forgoing regular exercise such as jogging. The lack of that exercise and the effect of being “trapped” had a noticeable effect on SSHS subject psychological stress.

The NIH study subjects transitioned from a variety of home and external conditions into a consistent, controlled environment for 28 days in which stress and environmental factors which may have resulted in overall net-reductions in stress. Some new stress was undoubtedly introduced because the subjects were in an unfamiliar environment and subject to frequent scrutiny as well as periodic examinations and blood tests.

On the other hand, test subjects were housed in a comfortable dormitory setting free of many everyday demands — work, food preparation, washing dishes, household chores shopping etc. They were allowed time for monitored exercise and received additional attention and personal care.

In addition, NIH trial’s longer duration allowed other physiological and biological processes that may affect inflammation to reach equilibrium. Those include gut (and other microbiomes), hormone fluctuations, and potential epigenetic effects.

SSHA’s test subject psychological stress was elevated due to a series of potential and actual PG&E power shutoffs related to red flag fire warnings and the Kincade Fire. That wildfire caused both delays and, in late October, required the disposal of substantial amounts of freshly prepared intervention foods which — without preservatives and constant refrigeration — spoiled.

All food preparation and sourcing prior to the start of the trial was concentrated on foods for the study, the actual food consumed by the SSHA test subject in the pre-baseline period. As a result, the food sourcing and preparation period was time-constrained, mainly pre-prepared grocery and fast-food meals. This made the immediate pre-baseline diet less healthy than usual.

That stress continued throughout the six-day trial as the SSHS test subject — with the help of two extraordinary culinary cooks and bakers — rushed to complete the study in advance of new, pending power shutoff warnings from PG&E.

The length of time — six days — may not have been adequate to allow hsCRP levels to reach equilibrium.

While the pharmacokinetics of hsCRP shows that it is rapidly metabolized, homeostatic mechanisms may have resulted in slower overall changes in body concentrations and lower measured levels after the intervention. The author of this summary does not yet have adequate data to assess that concept. 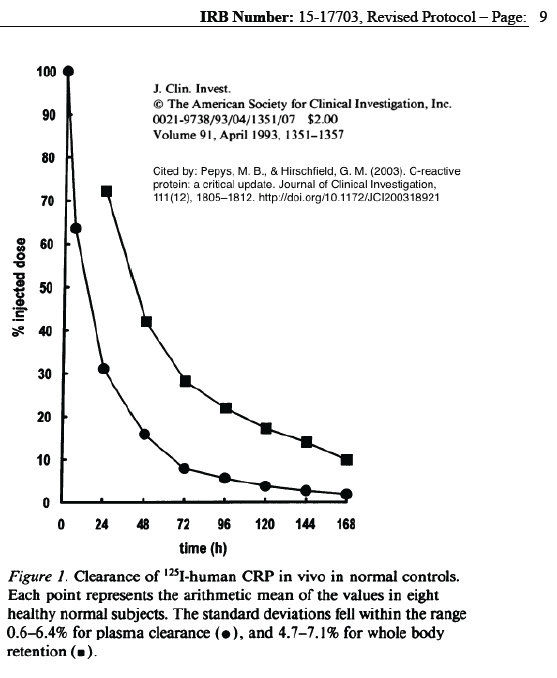 In addition to the study time period, an n=1 study has no way to detect outliers whose body chemistry may differ from the average study subject.

The 28-person cohort and 28-day extent of the NIH/Hall study offers a great advantage.

Indeed, if the NIH/Hall study had added a BPA environmental chemical panel to their study, it would have added a great deal of information.