This is a true tale for modern consumers, based upon results from a scientific paper from the Center for Research on Environmental Chemicals In Humans. To comment, please email CRECH Center Chairman and study main author Lewis Perdue.

In science, as well as in classic mysteries, that which is missing often provides a pivotal clue discoverable only after a bit of detective work. 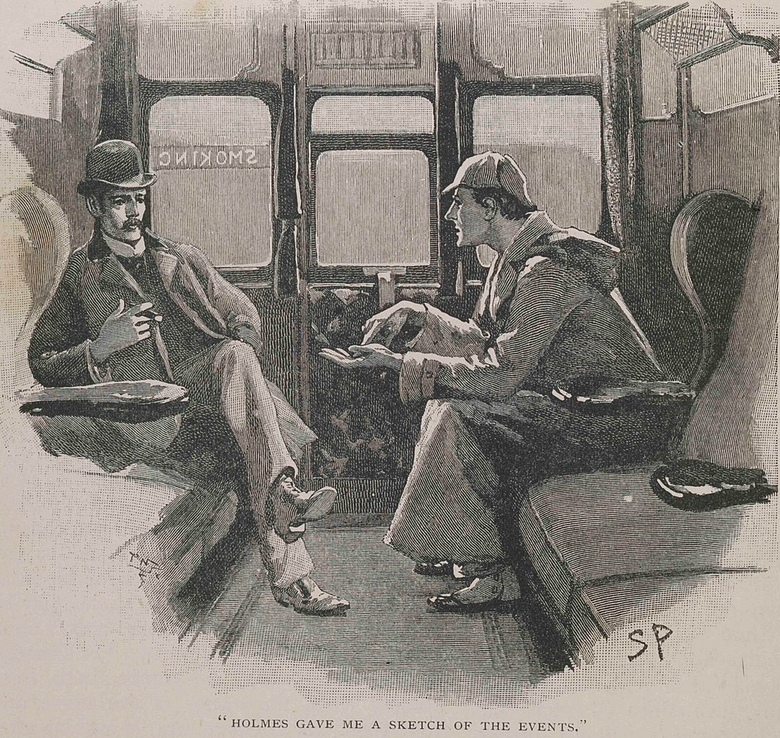 In Sir Arthur Conan Doyle’s 1892 short story, Silver Blaze, Sherlock Holmes looks fruitlessly for a murderer and his missing thoroughbred until the world’s most famous detective realizes he has overlooked what is missing.

From the short story:

Gregory (Scotland Yard detective): “Is there any other point to which you would wish to draw my attention?”

Holmes: “To the curious incident of the dog in the night-time.”

Gregory: “The dog did nothing in the night-time.”

Holmes: “That was the curious incident.”

Likewise, a curious incident with the mass spectrometry results in our 2022 paper designed to produce a human clinical marker for Bisphenol A (BPA) in a causal, replicable dietary intervention study found its own curious incident: the BPA dog that did not bark.

The BPA Dog That Didn’t Bark

As investigators with the Center for Research on Environmental Chemicals in Humans (affiliated with the University of California San Francisco School of Medicine), we set out to design a study that would resolve the scientific conflict. We had no idea this would lead us into the realm of silent chemicals that did not bark.

Our primary effort was to design and conduct a first-of-a-kind dietary intervention study to explore a potential causal relationship between human blood serum levels of BPA and High-Sensitivity C-Reactive Protein (hsCRP), a proven clinical indicator of inflammation. It was known primarily from animal studies that that BPA caused inflammation. But no one knew if changes in human blood BPA levels would directly “move the needle” for hsCRP tests.

Our primary motivation was to create an ethical, accurate way to get direct human results. This is because rats are not humans: animal studies — as important as they are in furthering research — are frequently not directly relevant to humans. This is evidenced by the fact that, when used in pharmaceutical development,  rat data is wrong as much as 92% of the time.

While our work found a correlation between inflammation and plastic-associated food, the mass spectrometry data found no BPA. That took us totally by surprise.

Whack-A-Mole With Bisphenol A

We were stunned at those initial mass spectrometry results indicating that BPA was not detected, and scrambled to figure out if we had done something terrible wrong with our study protocol. We had no doubt that the mass spectrometry had been done correctly, by one of the top labs in the United States and that the human blood serum samples had been drawn properly and maintained at -80 degrees C.

Looking deeper for the absence of BPA, we scrutinized the mass spec data further and found BPF and BPS. No BPA, but two of its whack-a-mole analogues (For the gritty details, see tables at the bottom of this article).

That discovery appears to be the first data-based confirmation that plastic product companies are playing whack-a-mole with consumers who mistakenly believe “BPA-Free” offers a healthier alternative. But contrary to that misconception, the extensive scientific data we cited in our paper indicates that the whack-a-mole chemicals being substituted are as hazardous as BPA — sometimes more so.

All of this is significant because Bisphenol A has been a prominent issue of public concern documented by scores of properly conducted, peer-reviewed, published studies by the world’s top academic research scientists have consistently found that plastic-derived chemicals such as Bisphenol A contribute to cancer, cardiovascular disorders, obesity, type 2 diabetes, metabolic syndrome, neurological and behavioral disorders including Alzheimer’s Disease, reproductive and developmental disorders and, allergies.

In a 10-year observational study of 3,883 adults in the United States, participants with higher urinary Bisphenol A levels were at a 49% greater risk for death from all causes.

Despite this evidence, no clear scientific consensus exists. This is because regulatory and industry investigators have deemed current exposure levels as harmless, while academic biomedical scientists continue to disagree and continue to develop scientific evidence that BPA is, indeed, a public health threat.

This ambiguous situation, about BPA’s effect on health has allowed companies to market  “BPA-free” products that are, instead, using “regrettable substitutes” — closely related and equally hazardous variations of the Bisphenol A molecule.

BPA versus BPF and BPS are incontrovertibly differences without distinction.

These BPA variations — called analogues — are created by tinkering with a small part of a basic molecule to produce a chemical that offers the same effect but with a different name and minor structural difference.

The whack-a-mole analogue  phenomenon is most notable in the field of designer opioids such as benzodiazepines or synthetic marijuana where a substance has been outlawed based on its chemical structure. Clever chemists then dodge the law by cooking up an up an analogue with minor changes that are legal … until the analogue is banned.

Significantly, whack-a-mole with analogues of any type can be considered successful only if the analogue produces the same or identical outcomes as the original — in the case of opioids the desired “high. For plastics, the whack-a-mole analogues of BPA are added for strength, hardness, flexibility, resistance to heat, ultraviolet light, and myriad other desired performance measures.

In the case of BPA, there are at least 13 bisphenol analogues. At least two of those — BPF and BPS — are verifiably being substituted for BPA in consumer products, despite exhibiting the same or similar health concerns. This is because chemicals with very similar structures can have very similar attributes.

It’s also readily apparent that the molecule diagrams below are remarkably similar.

Molecule Structures Below From PubChem, National Library of Medicine

Plastics: A secret and complicated matrix of polymers and other chemicals

It’s vital to understand that “plastic” is a mixture of polymers and additives.  What’s more, the exact composition of a plastic is a closely guarded trade secret and unregulated by any governmental or industry body.

While basic polymers by themselves don’t seem to pose a health issue (other than as sources of microplastics), additives generate their own set of issues because they are not chemically bound to the polymers. Instead, additive chemical molecules are loosely embedded in a polymer matrix, much like raisins or blueberries in a muffin.

As a result, additives can seep out of their polymer matrix due to heat, light, mechanical stress, and reactions with each other and the contents of the container. The phenomenon is commonly known as “leaching out”. For more details, see: “How Does the Food Chain Get Contaminated with Plastic-Derived Chemicals?”

Bisphenol A — which is both a polymer and additive — is added to plastics primarily for hardness, strength and its resistance to heat. BPA is a primary constituent of polycarbonate plastic.

Regrettable Substitutions Often Mentioned, But No Direct Proof … Until Now

While theoretical discussions of regrettable substitutions of BPF and BPS for BPA can be found in the scientific literature since at least 2014, our searches of PubMed and Google Scholar did not find any hard data on the actual practice. Our mass spec evidence appears to be the first.

Motivated by this unexpectedly silent chemical dog, we sought further evidence of the phenomenon by investigating scientific literature and found several relevant samples available indicated an increasing presence of BPF and BPS and a decrease in BPA.

While the results in our paper, and documented in the table below are certainly not numerous enough to attain statistical significance, they do offer data to indicate that BPA usage is, indeed, decreasing while BPF and BPS are on the increase.

The results are indicative, but not definitive in a scientific sense especially when considering the evolution of Bisphenol testing procedures over time and protocols which can vary from lab to lab.

However, combined with our mass spec results these data indicate that product manufacturers are playing whack a mole in order to market products which can be labeled “BPA-Free.”

Documentation for this article can be found in the footnotes of the study itself.

Some specific footnote topics and their relevant footnotes are highlighted below:

Lower than the Lowest Level of Quantification = (LLOQ)

Mice Are Not People: Why Human Trials Are The Gold Standard